Two years ago, police Officer Jody Thompson received a call about a child abuse case in the area. He was about to end his shift at the time of the call, but he decided to help out with on duty police officers and to lend assistance. When he arrived on the scene, little did he know that he would be meeting his future adopted son. The child in the abuse case was an 8-year old boy named John. 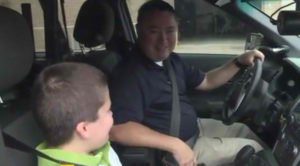 According to Thompson when he saw the little boy in the house where he was abused, he already knew that he would never leave the boy’s side. John was in bad shape when Thompson got to him. He was covered in bruises and was bound when he first saw Thompson. Thompson was the one that took John to the hospital that day, and he never left his side. Not long after the incident, Thompson and his wife decided to adopt the 8-year old. 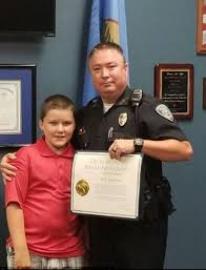 “He means everything in the world that we live in. He’s the strongest person I’ve ever met. He means the world,” Thompson said. Today, John is a straight-A student and is even excelling in a gifted and talented program in his school. And John knows that he owes a lot to the police officer that he now calls Dad. And the story does not end with John. Soon after adopting John, Thompson found out that the mother had given birth to a baby girl in jail. The baby was barely a day old in the hospital when Thompson decided to adopt her as well. She was, after all, John’s biological sister.