Jennifer Day and her husband had sent out invitations for their son Graham’s upcoming 8th birthday party. Although no one had responded, they still hoped for the best and bought pizza and baked a large birthday cake. But when the day of the party arrived, no one had showed up once. To make things worse, this isn’t that first time that this has happened to Graham. On hisÂ 6th birthday, the very same thing happened on the party. Graham was sure to be devastated if the same thing happened again. 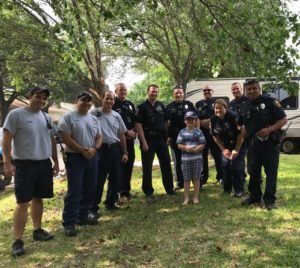 But Jennifer was not going to let this happen to her son once again. Jennifer and her husband drove to the Hurst Police Department and asked one of the officers if he wanted to see her son at the birthday party’s location, at their house. Jennifer said Graham had always wanted to be policeman and having an actual police officer would salvage the day. Not only did the officer agree to go, but an entire shift of police officers showed up at the party. Even a few firefighters joined in and celebrated with Graham. 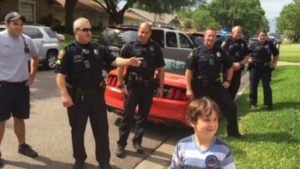 “By the end of it, I think he forgot that his friends didn’t come over for his birthday,” Jennifer said. “He was so happy. Something like this, it literally guts you as a parent because you can’t fix it, at least in that moment,” she said through tears. “But the Hurst Police Department and the Hurst Fire Department, they went above and beyond and made his day.”