Deep Sea Expedition Discovers a Fish With No Face

Fish found in the deep-sea are often the most bizarre and weird creatures to have been discovered. Most of these creatures are not seen on the surface and new discoveries can be made with expeditions to the deep ocean waters. These creatures live in a place where there is not warmth and no light, so they have evolved to have very strange and bizarre features. In a recent expedition, researchers found a fish with no face.

The Australian research vessel Investigator has been exploring the deep seas for well over a month. In their expeditions, they have discovered several strange creatures, many of which they have never seen before. The mission is using all kinds of techniques to pull up what they can from the deep. They are using camera fed sleds, grabbers, and large fishing nets. The 40-member team had been shocked at the discovery of the faceless fish. And they were well aware of the importance of the discovery. 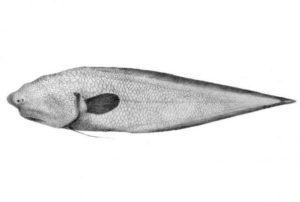 “Abyssal animals have been around for at least 40 million years but until recently only a handful of samples has been collected from Australia’s abyss,” said chief scientist Tim O’Hara of the Commonwealth Scientific and Industrial Research Organization (CSIRO). “It is a world of jelly and fangs, with miniature monsters gliding up and down waiting for prey.”

But in their research, they were disappointed to find that the animal was not a new discovery. Eel expert identified the fish as a faceless Cusk Eel. The first specimen was discovered in 1974 by researchers on the HMS Challenger, the very first global deep-sea mission. The creatures actually have eyes, but they are very small and useless in the dark depths where they live.