In 1926, Leopold Kotnowksi from Poland visited the United States and presented the White House with a huge greeting card. The card was to greet the country on its 150th birthday, or its 150th year of independence. The card had contained 5 million signatures. It also included poems, artwork, photos, and even some pressed flowers, all from the citizens of Poland. Recently the card has been unveiled once again to celebrate the recent 4th of July celebrations in the United States. 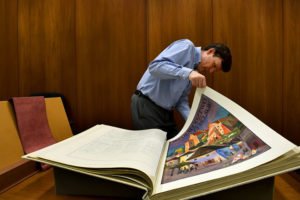 The birthday greetings were written on more than 30,000 pages which was compiled in more than 100 volumes. All the content was written by the people of Poland. It was sent following the country’s independence from World War I. Most of the greetings were written by Polish citizens that wanted to show gratitude and affection for the United States. According to a historian, the signatures made up almost a sixth of the total Polish population in 1926. 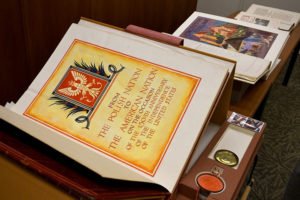 “Noble Americans,” the Poles wrote, “your national holiday is sacred not for you alone. It finds a warm reverberation over the whole world. We, the people of Poland, send to you, citizens of the great American union, fraternal greetings and our deepest admiration for the institutions which have been created by you. In them, Liberty, Equality and Justice have found their highest expression and have become the guiding stars for all modern democracies. With eternal gratitude in our hearts,” said the Poles declared, “We desire to wish your country and your nation all possible prosperity. Â Long live the United States of America!”