Cop Captures Gator in Parking Lot With His Bare Hands

Deputy Cameron Coward of the St. Johns County Sheriff’s office was called in to help with a situation in a parking lot earlier this week. It turns out,Â a small alligator had been seen in the parking lot. Some of the people who had parked in the area had seen the reptile and had called the authorities. Despite having no formal training in handling animals, Officer Coward decided to take matters into his own hands. 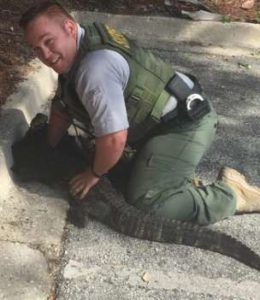 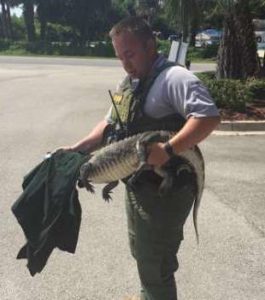 Mulligan said that the officers who are called in for this kind of situation usually calls the local wildlife commission, especially for large reptiles. But since the alligator was not that big, Coward decided to handle the animal himself. Alligators are one of the biggest reptiles in the world, and in the wild, these animals can reach over 20 feet in length.

“He threw a bag over its head. It’s a normal issue to see alligators. He just picked it up and put it back retention pond so it didn’t get hit by a car,” Mulligan said. “Had it been a 10-12 foot one, they would have handled it differently.” According to the report of the sheriff’s department, neither the alligator nor Officer Coward was harmed during the daring rescue.