At the University of Southern Denmark, scientists discovered three rare books that were covered with a deadly poison. The books were dated to be from the 16th and 17th century and the covers were covered with arsenic. X-ray analysis of the books held by the school revealed that there was a large concentration of the poison on the front and back covers. 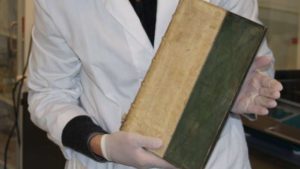 The books were studied because the University discovered that medieval manuscript fragments were used by bookbinders to make their covers. When they tried to identify the Latin texts in the book, they couldn’t identify some of them because of a heavy layer of green paint obscuring the letters. When they studied the paint, they discovered that it was in fact arsenic, one of the most poisonous substances in the world. 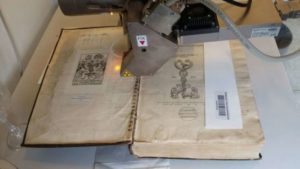 “The moment we put the X-ray beam on the green surface we saw the fantastic high amounts of arsenic.” said Kaare Lund Rasmussen, an associate professor at the University of Southern Denmark. Although the poison would be deadly to humans, it is likely that it was applied to the books to protect them against insects and vermin. The three volumes are stored with safety labels in a ventilated cabinet. The university plans to digitize the books to lessen the handling of the poisonous pages.

Because the books were rare, they were often handled with care with the handlers wearing gloves and masks. This could well have saved the lives of the researchers who handled them previously, who were unaware of the toxic covers of the books.