A group of gamers in Texas surprised their local community when they decided to play a real-life version of the popular video game Mario Kart. These players dressed in their favorite characters’ outfits with balloons training behind them, just like in the game. They used makeshift skateboards as their “karts” and raced each other in the streets of Austin. 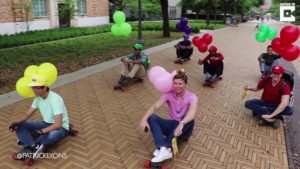 “It was 9 a.m. on a Monday morning, and all of sudden these guys sitting down on electric skateboards go zooming by dressed like Mario Kart characters with balloons on their backs,” said Patrick Lyons, who captured the funny moment on video and posted it on YouTube. Â “It was a really strange sight, but college kids are familiar enough with Mario Kart to know exactly what it was, so it got reactions of appreciation and laughter overall. 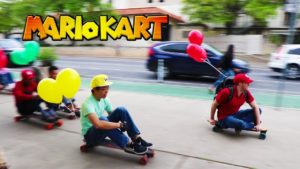 “Many people who looked on were laughing and capturing the game on Snapchat.” said Lyons, “I was just so happy that we’d pulled it off â€” I’d had the idea for a while because I actually ride my board sitting down normally, but it wasn’t until I started meeting other people with electric boards that I knew we could pull off this Mario Kart effect.”

The game Mario Kart is a series of go-kart racing video games released as a spin off from the Super Mario game series. The first game was launched in 1992 and the entire series has been a popular success. So far there have been 8 sequels to the popular game, with the latest being released last year.