Mike Smith, a plant grower from the UK has claimed that he has invented the world’s hottest pepper. According to Smith, the pepper is so strong that it should not be eaten by humans. The new pepper, named Dragon’s Breath, has reportedly been measured at 2.49 million units on the Scoville heat scale. The previous hottest pepper, the Carolina Reaper, was measured to have an average heat scale of 1.57 million Scoville heat units. While people have eaten and survived an entire Carolina Reaper, the Dragon’s Breath is almost double the intensity and heat and could be dangerous. 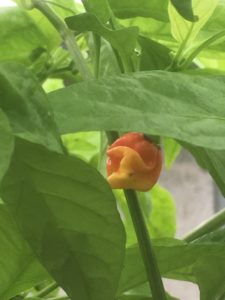 Smith had worked with professors at the Nottingham Trent University to develop this new pepper. At first, the pepper was made as a plant feed that would help ward off diseases, and it was never made for human consumption. The pepper is so hot that eating it can cause severe health problems. But Smith has said that people have actually tasted the pepper and lived to tell people about it. Smith warns that they have only tasted the chili, and not eaten it as a whole. 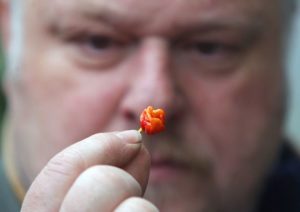 “We had a guy eat it this morning and survive,” Smith said. “It’s got a really freaky flavor to it. It’s very fruity but very, very hot. I realized it was too hot for me.” Aside from providing thrill seekers with the hottest pepper in the planet, the Dragon’s Breath may have some other uses. The oil from the pepper can used as a skin numbing agent, or the chili’s heat can be used to ward of pests and insects. Smith is still waiting a verdict from a committee on the Guiness World Records after submitting an application regarding the world record.