A pizza shop in Michigan made its first and only delivery to a cancer patient. Not only did they make an exception for the patient, but they had to travel 225 miles and three hours to get the pizza to the patient. That is because the patient was all the way in Indiana. The touching story was told by the patient’s wife on social media, where it quickly went viral. 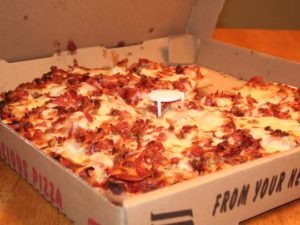 Rich and Julie Morgan spent two years living in Michigan and one of their favorite places to eat was Steve’s Pizza. After 20 years, the couple decided to revisit their favorite pizza joint for the 56th birthday of Julie. But before they left, Rich, who has cancer, went to the hospital where he ended up in intensive care. He was told that he had a few weeks left to live. When Steve’s Pizza heard about the couple, one of their employees did something extraordinarily kind.

“Sometimes a slice of pizza is more than it appears to be! Read on for the story of an epic pizza delivery and the unbelievable kindness of a stranger,” Julie wrote on Facebook, “Unbeknownst to us, my dad contacted Steve’s Pizza and spoke to Dalton, a manager there. He told Dalton a little bit about our situation and asked if the shop might send a friendly text or card to us. 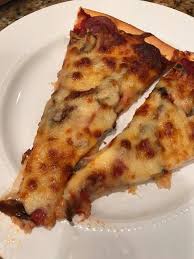 “Without hesitation Dalton asked what kind of pizza we wanted, and told my father he would bring it to us (by the way, Steve’s doesn’t deliver). My dad clarified that we were in Indianapolis, at least three and a half hours away from Battle Creek. Dalton said he understood that, and would leave after he closed the store.”

“And so, while Rich and I slept, at 2:30 AM, Dalton rolled into our driveway, left the car running and delivered two extra special pizzas to my waiting family. He told them we were in his prayers, and offered to help in any way he could. My dad offered to put him up in a hotel, but he refused and immediately left for the return trip home because he had to work the next day.”

“I am beyond overwhelmed and humbled by this act of genuine kindness. Dalton brought our family so much joy – and the best pizza in the world – at a really difficult time. While ‘thank you’ hardly seems adequate – from the bottom of my heart, thank you, Dalton from Steve’s Pizza in Battle Creek, MI for making your epic middle of the night pizza delivery!”