In Fargo, North Dakota, the general manager of a Little Caesars restaurant, Michelle Lussier, noticed that people were picking up the trash bins near her restaurant. Upon investigating, she realized that homeless people were eating thrown or leftover pizzas from the trash. She was dismayed upon learning this and decided to do something about it. 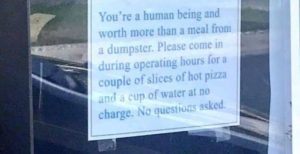 So Lussier posted a note the storefront window of her restaurant offering fresh slices of pizza for free. She placed it in visible area so that the local homeless community would know about the new policy. She said that it was better than the slices of pizza that ended up being thrown away in the trash, and it was definitely warmer and more sanitary.

“To the person going through our trash for their next meal, you’re a human being and worth more than a meal from a dumpster. Please come in during operating hours for a couple slices of hot pizza and a cup of water at no charge. No questions asked.” said the note. The note even made the local news and it was posted on social media, where it quickly went viral. 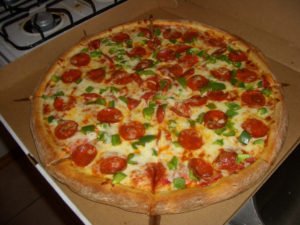 “Don’t feel embarrassed if you’re hungry and you don’t want to do what others do, you know, stand on the corner for handouts. You feel down about that, you’re more than welcome to come here and grab a couple slices.” said Lussier in an interview. The Little Caesars pizza restaurant where Lussier works also donates leftover pizza to the homeless. She says that with so much food going to waste, it’s better to feed a few more hungry mouths in the process.