Earlier this week, a bus driver from India was suspended after being caught letting a monkey drive his bus. The suspension was made after a video of the driver and monkey was posted on social media where it quickly went viral. The video caused quite a lot of laughter on the internet and a little bit of outrage from the local government. 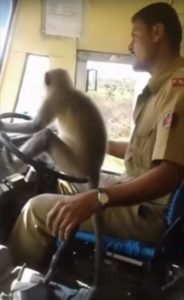 The 36-year bus driver can be seen smiling and patting a langur monkey in the video as it sits on top of the wheel a moving bus. The incident took place last week, and authorities only learned of the video when it went viral. There were around 30 passengers in the bust at the time and none of them complained.

“Driver M. Prakash has been taken off duty for allowing the monkey to sit on the steering wheel and handle it,” said T.S. Latha, a spokesperson for the government’s road transport corporation in southern Karnataka state, “Passengers’ safety is paramount and the driver cannot risk it by allowing a monkey on the steering.” 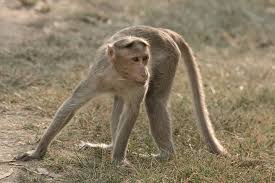 It is possible that the monkey just approached the driver to be pet and groomed. Monkeys are known to be fond of petting and they can spend hours removing items and ticks from each other’s fur. It is a way of them to stay clean but also a means to socialize with other monkey and animals. The local media reported that the langur monkey boarded with a passenger and that it was at the when for around ten minutes.