Earlier this week, one of the pilots in Germany got into a festive mood and decided to share it by flying his plane in the shape of a Christmas tree over the skies of Germany. The pattern was spotted by radar watchers in the area. The captain of the plane left the port city of Hamburg then traced the pattern of a tree, complete with ornaments, as he flew as far as Stuttgart, around 400 miles away before returning to base five hours later. 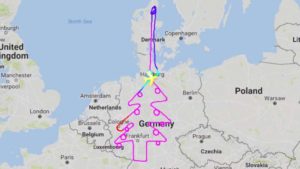 The pattern was posted online with the caption “Some early Season’s Greetings from one of Flight Test Teams in Hamburg.”Â  The fact that the Christmas tree was drawn using an airplane that flew over the entire country of Germany shows the skill level of these pilots. This wasn’t the first time that a pilot had used his flight pattern to draw something over the sky. Earlier this year a pilot drew a phallic symbol in clouds by flying a US navy warplane. It was hilarious for everyone that saw it but the Vice Admiral, Mike Shoemaker, commander of Naval Air Forces, found nothing funny about the incident. 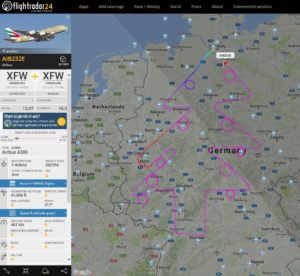 “The Navy holds its aircrew to the highest standards and we find this absolutely unacceptable, of zero training value and we are holding the crew accountable.” said Admiral Shoemaker, “Sophomoric and immature antics of a sexual nature have no place in naval aviation today. We will investigate this incident to get all the facts and act accordingly.”