Lauris Hiner has not seen her high school sweetheart Paul since he left to fight in World War II almost 70 years ago. She was still in high school when he left the country. They went out for a year or so before Paul was deployed. The long distance and the tension of war was too much and they two eventually lost contact with each other. But now after seven decades, it looks like they are about to reconnect and rekindle an old flame.

Both Paul and Lauris are widowed. A few years ago, the 90-year old Paul found out that Hiner’s husband had passed away, he started to contact her. He also began to send her flowers and hand-written letters. Paul lived in Washington State, and Hiner was in California, so they hadn’t had a chance to meet in person. But Hiner’s daughter Susan Broaddus decided to take her mother to finally see Paul. 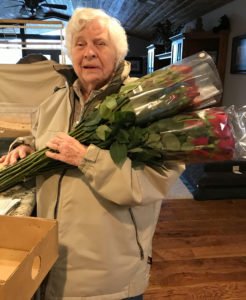 “He took us out to dinner,” Broaddus said. “I chaperoned.Â  It was adorable. He’s a sweet. He’s very much a gentleman and it’s very nice to see such a big smile on my mom’s face.” After the dinner, Broaddus said that Paul asked when he could see Hiner again and even requested that they come over the following week.

“They’ve had this long distance relationship for a number a years. He said if he’d known my dad died 15 years ago, he would have married her years ago,” Broaddus said. While the date went well, Broaddus said that they will probably visit Paul again by next spring.