The panettone is a traditional Christmas treat that has been served in Italy for centuries. But for this Italian bake shop, the decided to do something special for this year’s loaf. They made a panettone that broke the record for the largest one ever made. The record breaking loaf was made by a Milan based Bakery known as the San Gregorio Patisserie. 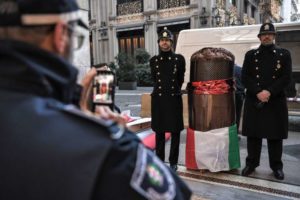 The panettone was weighed at around 300 pounds and was measured to be more than 6 feet tall. It was baked in a special oven. Making a regular traditional panettone takes a lot of work. It includes cultivating the yeast, baking the dough, and cooling the cakes. This is why it usually takes several days to churn out one loaf. The bakers at San Gregorio needed even more time to make sure that their giant loaf was cooked properly. In the end, the record breaking panettone was served for free at the Victor Emmanuel II shopping center in Milan. The loaf produced a total of 1,200 slices. 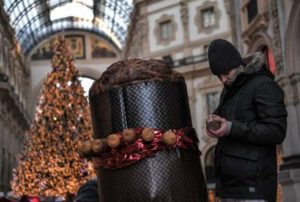 The San Gregorio patisserie was opened in 1945 and the panettone was one of the items that they were known for. They ship their special loaves to everywhere all over the world. They ship 200 special loaves to New York City alone, especially during the Yuletide season. The panettone is made with traditional ingredients including raisins, sweetened citrus peels, and a special dough. San Gregorio credits their loaf to a special dough that was passed on from their mother. It is a secret that the owners Angelo Bernasconi and Savino Moretti hold dear to their hearts.