There are many ways for people to show off their wealth and money. There’s fashion, houses, cars, and even boats and planes. But in some parts of Asia, one of the most common ways to show off your riches is by owning a certain kind of exotic fish. But this isn’t just any gold fish in a tank, it is a very rare, and very exotic fish that can cost as much as $300,000.

The Asian arowana fish is sought after because of its shiny scales and sinuous body. It is known as one of the most expensive aquatic creatures in the world. A young arowana fish in Singapore could fetch as much as $300, while rare adult white albino arowana could fetch upwards of $70,000. The even rarer golden red Arowanas that can cost as much as six figures. 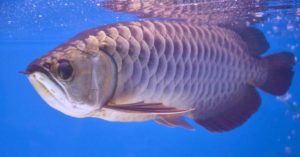 The arowana fish, also known as the “dragon fish” are bred in South East Asia and they can grow to be around three feet long. Most people believe that the fish brings good luck and wealth. The fish is protected by the Endangered Species act, after the fish was almost depleted in the wild. In 1975, 183 countries signed a treaty that would classify it as a rare species and banned the fish from international trade. That is why the fish is so rare to find these days.

Some owners are so obsessed with their arowana fish that they are spending thousands of dollars for plastic surgery on them. They would get eye-lifts of chin cosmetic surgery to make them look more attractive.