The party scene in Los Angeles is constantly changing. There are new trends that happen almost monthly. But this latest party trend may have even the most hardcore party goer scratch their heads. That is because the latest LA party quirk has been the addition of Nigerian Dwarf Goats. Two particular goats, named Pippin and Spanky, are known to be used in parties in Los Angeles. 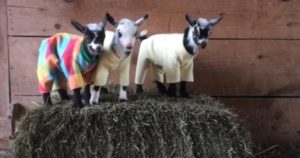 The handler of these goats, also called the goat mom, is Scout Raskin, a former child actor and animal lover. She set up Party Goats LA last year and charges $99 an hour. She brings her goats to a party or event when they are booked. One of the tricks of the goats os when they jump onto one of the backs of a volunteer when they kneel on all fours. Despite being the same breed and age, Raskin says they have very distinct and different personalities. According to Raskin, the goats are unfazed by the loud music and crowds at parties. 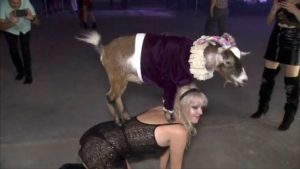 “We’ve been to parties with DJs where there’s loud music and I myself was concerned about how they would react to it. Pippin fell asleep and was totally calm and chill and fine in that environment, and it didn’t really seem to hurt their ears or anything like that,” said Raskin. Â

“Usually people at parties have their favorites. Some people love Pippin because he’s really cute, but he’s the cute dumb one,” Raskin said. “And then some people really like Spanky because he’s more chill and quiet and they feel like they can connect with him more.”