People are Getting Tattoos in the Design of Vintage Pyrex Patterns

A recent trend on social media website has shown a lot of people getting tattoos in the design of vintage Pyrex patterns. Pyrex are vintage glass containers that have been around since the turn of the century. They are known to be the bowls, cups, and glasses, and baking containers that our grandmothers used to use for casseroles and pot roasts. They are also known for the unique patterns that they used to have. 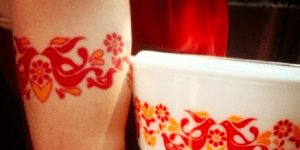 These patterns are now being used by people as tattoo designs. The trend was picked up by the social media website Instagram, where people can now showcase their Pyrex inspired tattoos. Most people chose the Pyrex patterns simply because they were beautifully designed, while others chose the pattern that they associate with their grandparents or loved ones.

Pyrex has been around for at least a hundred years. They started as a glass works company but they eventually found a niche in baking goods glassware that was durable and useful. This made them a household name, especially in Europe during the 1930’s and 1940’s. They have since been associated with durable and tough glass that can withstand high temperatures. 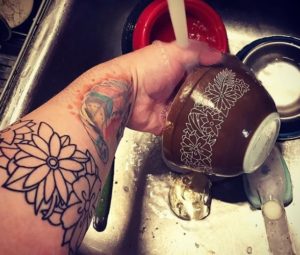 During the 1950’s and the 1960’s the company expanded to create special designs for the glassware that they produced. This created designs that many connect to Pyrex patterns that they find in old bowls and glassware. The designs have meant so much to a certain generation that they decided to use them as inspiration for their tattoos. Some designs are so intricate and beautiful that you wouldn’t even guess that it came from a glass bowl.