Earlier this week a penguin couple was spotted celebrating their “hatchday” by cuddling during a romantic date. The two flightless birds were seen cuddling next to each other while admiring the view from their waterfront home. The picture of the flightless couple was published on social media and has since gone viral. The penguins were African Penguins at the Monterey Bay Aquarium. 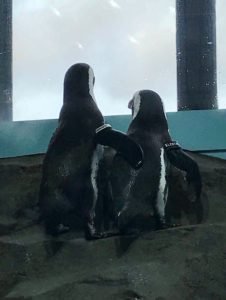 Amigo the penguin was photographed by the Monterey Bay Aquarium where he lives with his mate, named Elizabeth. The male penguin can be seen placing his arm (or wing) around his mate. The couple was celebrating Elizabeth’s 9th hatch day. Hatch day is what most people call birds’ birthdays, as they are born from eggs. African penguins, also known as jackass penguins or black-footed penguins are found in the southern African waters. They are known as jackass penguins because of their donkey-like squawk. They are currently an endangered species and are under protection of the law. 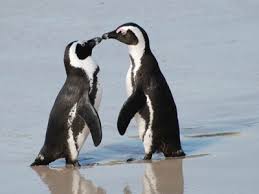 “Two lovebirds on a birthday date by the sea! Amigo was spotted snuggling up to his lovely lady Elizabeth on her 9th hatchday today, as they took in a romantic view of the Monterey Bay.” posted the aquarium on their official twitter account. Elizabeth arrived at the zoo two years ago and was paired with Amigo. According to the aquarium staff, she is known to be independent and loves to spend time on her own, but she is very much attached to Amigo. Many penguin species are monogamous and mate for life.