A Florida couple was going through debris left behind by Hurricane Irma when they discovered a bottle with a message inside it. They decided to keep it and find out what the message inside read. Later on, they were shocked to find out that the bottle and its contents were not only decades old, but came from across the ocean, all the way from Scotland. 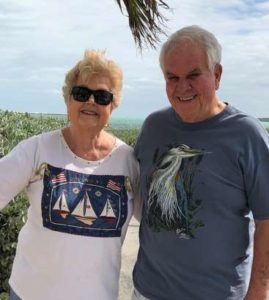 Married couple Ruth and Lee Heunniger made an incredible find as they walked through the beach park near their property last year. They were surveying the damage left in the wake of the storm that had just passed through the area. They were rummaging through some debris when they discovered the bottle, and noticed that it had a message inside it.

“We’ve always picked up bottles,” Lee Huenniger told InsideEdition.com. “We’ve beach-combed before even when we were kidsâ€¦ you always hear and read about a note in a bottle. Well, we always kind of check and this time there was a note in the bottle.” 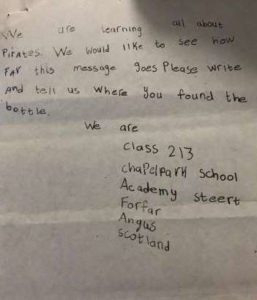 The message in the bottle read:Â  “We are learning all about Pirates. We would like to see how far this message goes. Please write and tell us where you found the bottle. We are Class 213, Chapelpark School, Academy Street, Forfar, Angus, Scotland. ” the bottle had traveled 44,000 miles to get to the beach in Florida. Ruth was curious about the letter and wrote back at the address. It took a month before they got a response from a former teacher at the school.

“We forgot to put a date on the letter but would you believe it, that bottle was set on its journey more than 30 years ago!!!” wrote the teacher. The teacher also said that the school had sadly shut down in 2008 and was turned into apartments. She also inserted a picture of her students from the time, dressed as pirates.