In Rochester, New York, a patient that had undergone brain surgery was asked to play his saxophone while he was still on the operating table to make sure that they would avoid the parts of his brain that he was using to play music. The operation actually took place a little over a year ago, but the findings were only recently published this week in the Current Biology journal. It was a breakthrough procedure in brain mapping and in monitoring brain activity. 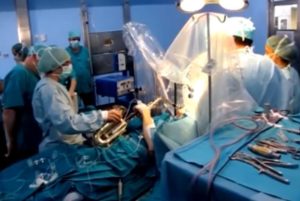 A team of medical experts and music experts teamed up at the University of Rochester to make sure that the surgery to music teacher, Dan Fabbio, would be successful. They used magnetic resonance imaging to map the brain and pinpoint areas that were activated when he played music. Fabbio was under surgery to remove a benign tumor in his brain.

One of the chairpersons at the Department of Neurosurgery said that surgery was a breakthrough in brain surgery and it helped in mapping the brain and narrowing down the parts of the brain where music resides. It also showed that using an MRI can indicate where brain activity occurs. Having a patient awake while doctors were operating on his brain may seem extreme, but it is actually a common procedure during operations when surgeons are cutting into brain tissue. 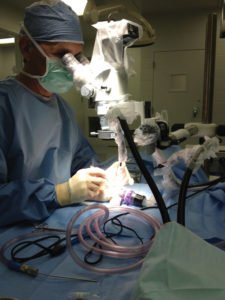 “It was a beautiful moment,” said Brad Mahon, who was part of the surgery team that prepared Fabbio and monitored his brain activity. “The tumor was removed at that point, and he was playing the saxophone gloriously. We knew we had done something special. You can’t just look at the brain and know in a given individual exactly which region is carrying out which function. You have to do some kind of brain mapping.”