Pastor Discovers 706-Carat Diamond in Village and Gives it Away

Emmanuel Momoh, a pastor in Sierra Leone found what turned out to be the biggest diamond found in the continent for more than 40 years. The pastor turned the precious stone over to the government, saying he wanted the diamond to help boost the development in his poor nation. Despite the rich deposits of diamond in the country, Sierra Leone remains an impoverished war-torn country that had just ended its decade long civil war in 2002.

The diamond is a 706-carat alluvial diamond, which was found in Yakadu village in Sierra Leone’s eastern region, which is also known as a hub for diamond finds. The stone was presented to the country’s President, Bai Koroma. The gem is a little smaller than a hockey puck, and it is the second largest diamond ever found in the country. The largest stone found was discovered in 1972, when a 968-carat was found by miners. The stone was called the ‘Star of Sierra Leone’, and was sold for more than $2.5 million. 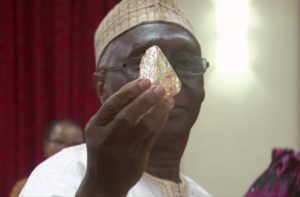 Momoh told the media that he turned the diamond over to the government because he was touched by the development that the government had been making in the Kono District, where the stone was supposedly found. The pastor stated that road construction and improvements to the power grid were one of the more significant developments in the area.

President Bai Koroma expressed appreciation and gratitude for Momoh’s actions. He could have smuggled the gem out of the country and collected millions in the process. Instead Momoh looked to make his country better. Koroma promised that the diamond would be sold to the highest bidder and the money will be used to further improve the state of the country. According to a spokesperson for the Sierra Leone government, the diamond had not yet been valued and was currently under security of the Bank of Sierra Leone.