We live most of our lives trying to the best that we can. We accomplish our daily routines and try to make the most of each repeating day. Every once in a while, we get a chance to shine and show our mettle. Recently, a CCTV video was able to capture how a passing stranger rescued a drowning cat at the London’s Royal Docks then casually walks away. The cat, named Felix, is actually the official cat of the Royal Docks Management Authority and spends most of its days being chased around the docks.

The video footage, which has gone viral shows a passerby rescuing the cat, named Felix, after he fell into the River Thames because of a fight with a rival feline. In the CCTV footage, you can see two cats chasing each other before falling into the water. Then we see a passing man in a bright red jumper enter the screen, run towards the railing, and hangs down over the edge of the dock to rescue the cat. Then the brave stranger simply dusts himself off and walks away. Social media has taken to call the man a hero. 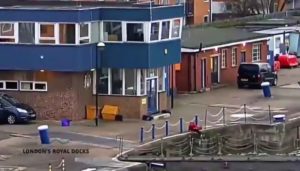 “Felix the RoDMA cat ended up in the drink while bravely engaging in a hostile territorial battle (i.e. running away) from another cat.” Said the Royal Docks Management Authority in a statement “ We can happily report that Felix suffered no injury or trauma. She also seems to be completely unaware that the rest of the RoDMA team has been laughing behind her back after the blase ‘nothing to see here’ routine that followed her dunking.”