Paralyzed Man Regains the Use of Arm in Breakthrough Medical Study

After a disastrous bike crash, Bill Kochevar was left paralyzed from the shoulders down. He had to use a specialized wheel chair and a straw controller to move around. But thanks to the latest medical technological developments, he can now move his hands and feed himself, something that he has not done in the past 10 years. This breakthrough is a medical first in the field of curing patients with partial paralysis.

Kochevar uses a prosthesis that makes the use of electrodes and several wires and state of the art computer software to connect his brain to the muscles in his arms. This prosthesis is a way of bypassing the connections that were severed in his spinal injury. Instead of connecting through the neural pathways in his spine, his brain can communicate with the use of the wires and electrodes, through the computer software. 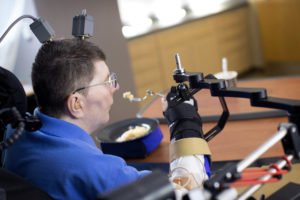 The prosthesis required the electrodes to be surgically implanted in his body, specifically in his arm. The electrodes are as small as a pill and they enables his brain to send and receive signals to the parts of his body. The software is able to read his brain signals and converts them into signals that his arms and hands can understand and interpret into movement. Thanks to this technology, Kochevar is now able to do everyday things he was unable to do in a decade, things such as scratching his nose, eating with a spoon, and drinking coffee.

Although the study is very groundbreaking, the prosthesis is still experimental and they have a long way to go before it can be used on other patients such as Kochevar. The technology also still has its limitations. One of them being that Kochevar needs to keep looking at his arm at all times in order to control it. This is because Kochevar has lost his intuitive sense of limb movement and location due to his paralysis.