Former Olympian Jamie Nieto counted himself lucky for many things. He had the opportunity to represent his country in the Olympic games, and he was about to get married to Jamaican hurdler Shevon Stoddart this coming weekend. But there was something he was determined to do to make everything perfect. He wanted to fulfill a promise he made to Stoddart: to walk in their wedding day. 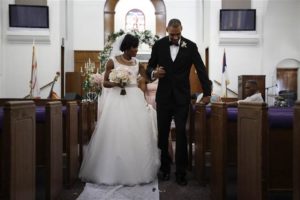 40-year old Nieto was a two time Olympic high jumper. But a tragic back flip accident in 2016 had caused a spinal cord injury that would leave him partially paralyzed. His doctors told him that there was a big possibility that he would never walk again. But Nieto stayed positive, and he declared to everyone that “there was never any doubt” in his mind that he would make a full recovery. 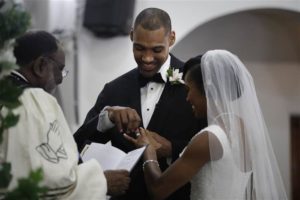 “I feel like it’s not fast enough. I want to be better tomorrow,” he said. “I’m built for speed, not for going slow. But I’m working on being the best walker I can be.” Nieto says one of the reasons he was able to stand and walk was because of the love and support of his soon to be wife. She helped him in his recovery and in return he promised her he would stand and walk on their wedding day. And he did not want to disappoint her. And on his wedding day, Nieto made his way to the Christ Temple Apostolic Church in San Diego on his own two feet. He was slowly shuffling his feet and had to hold on to his bride, but he was standing and walking. Almost everyone in attendance was either applauding or crying at the miracle.