When US First Lady Melania Trump visited the famous Beijing Zoo, she was photobombed by one of the most famous residents, the Panda. The First lady got to meet the giant panda named Gu Gu on her trip and got to learn about the panda bear and its nutrition and training. She was also greeted by a group of kids from a school who waved American and Chinese flags while singing a local folk song. 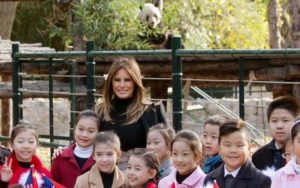 A photobomb is when you secretly insert yourself into the frame of a picture. The panda’s photobomb occurred when Melania took a picture with the kids outside the panda enclosure. It seems that the panda was drawn by the singing and the large animal appeared in the background just the first lady took a picture with the group. The first lady also signed a panda print during her visit, and she wrote: “Thank you to the Beijing Zoo! Wonderful to meet Gu Gu! Melania Trump.” 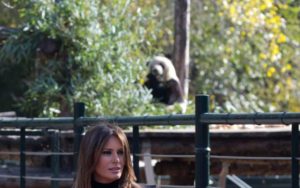 According to Li Xiaoguang, the director of the zoo, Gu Gu has been a goodwill ambassador of the zoo and a good looking panda with a robust memory. Gu Gu has born in 1999 in the zoo and has been there ever since. The First Lady was taken to a tour of the country later that day, including 30 minutes of hiking in the famous Great Wall of China. She said it was one of the most beautiful sights she had ever seen. Melania’s husband, Donald Trump headed to a summit in Vietnam after his state visit to China as part of his 5-nation Asia tour.