Earlier this week, the oldest customer complaint was discovered in a clay tablet. The complaint was from a man named Nanni who complained to a merchant named Ea-Nasir about how he was given the wrong grade of copper ore. The message was written in the Akkaidian language, an extinct East Semitic language that was spoken in Ancient Mesopotamia during the 30th Century. 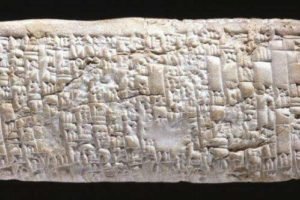 The tablet where the complaint was etched in is found in the British Museum in London. It took a lot of effort to place the complaint on a clay tablet, which reflects how bad Nanni felt about the delivery. Â “How have you treated me for that copper?” he wrote. “You have withheld my money bag from me in enemy territory; it is now up to you to restore my money to me in full.”

The pictures of the tablet were posted on the website Reddit and have since gone viral. It has more than 64,000 up votes and more than a thousand comments. The tablet photos had accompanying translation by an Assyriologist named A. Leo Oppenheim. So far it is unknown if the complaint was ever resolved. 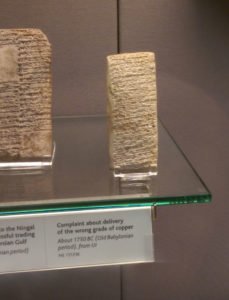 “When you came, you said to me as follows : ‘I will give Gimil-Sin (when he comes) fine quality copper ingots.’ You left then but you did not do what you promised me. You put ingots which were not good before my messenger (Sit-Sin) and said: ‘If you want to take them, take them; if you do not want to take them, go away!’” said Nanni.

“Take cognizance that (from now on) I will not accept here any copper from you that is not of fine quality. I shall (from now on) select and take the ingots individually in my own yard, and I shall exercise against you my right of rejection because you have treated me with contempt.” said the tablet.