Robert Johansson is a ski jumper for the Norwegian team at the XXIII Olympic Winter Games that are being held at Pyeongchang, South Korea. But for all his feats soaring through the winter air, Johansson has been making the headlines for one odd reason. He has officially won this year’s best facial hair of the winter Olympics. 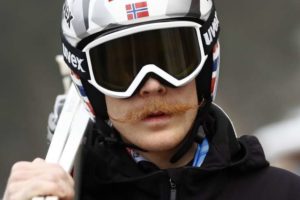 The 27-year old skier’s ginger facial hair is recognizable even from a distance. This distinct feature was cheered as he finished third place in the normal hill event. Spectators and competitors tolerated the cold, which was measured at minus 12 degrees Celsius (-10 degrees Fahrenheit). It was even colder in the mountain where the ski jump event was being held. The conditions caused many delays, and the ski jumpers finished well past midnight. At the end of his event, Johansson was surprised at all the attention that his handlebar mustache was getting.

“I started it two years ago and it’s been good for me,” he told reporters. He was smiling because he won the first Olympic medal of his career. “I started getting compliments for it and just went with it.” For finishing third, Johansson was awarded the bronze medal. Kamil Stoch, the reigning Olympic champion finished second for the silver medal. While Andreas Wellinger of Germany won gold. 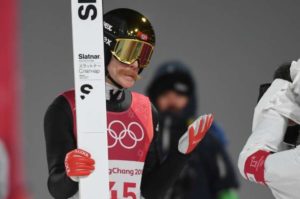 Johansson said he was still proud of his achievement despite not finishing first. He can also take comfort in the fact that his face will probably be more recognizable online thanks to his amazing mustache and the pictures of it that have gone viral. Although some people have hilariously commented that the added wind resistance of the mustache could have added a few milliseconds to his run.