Rookie Quarterback Deshaun Watson knows what it is like to be down on your luck. Before he was selected as a quarterback for the Houston Texans, he was living a very humble life with its own struggles. So when the professional football player received his first NFL paycheck, he decided to pay it forward to the cafeteria workers that had lost everything during Hurricane Harvey. 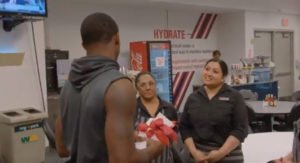 Watson arrived at the Houston Texans home of NRG Stadium. In the cafeteria there, he surprised three of its employees by handing over his first check. The check was worth around $28,000. He said he wanted to give them the money so that they could get back on their feet after nearly losing everything because of the Hurricane. The cafeteria workers sustained serious damage to their cars and homes as Hurricane Harvey hit the state of Texas the hardest. 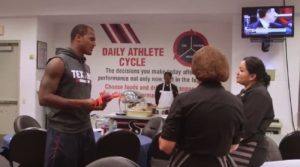 “For what you all do for us every day and never complain, I really appreciate you all, so I wanted to give my first game check to y’all to help y’all out in some type of way,” Watson says in a video. “Here you guys go.” The video was posted by the Houston Texans, where it quickly went viral on social media. Watson can be seen distributing three envelopes with ribbons to the three women who worked at the team’s cafeteria. One of the workers was overcome by emotion and gave Watson a well deserved hug. Watson is one of the youngest cornerstone players for the Houston Texans. He was selected 12th overall by the Texans in the 2017 NFL draft.