In Tonglo Sulawesi, Indonesia, the ancient Torajan ritual called Ma’nene is celebrated to honor the dead. The celebration occurs when clans visit the tombs of their departed loved ones. They clean the remains of their deceased and restock the coffins with personal belongings. This celebration is an ancient ritual that has been practiced in the region of Indonesia for hundreds of years. 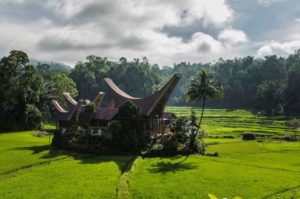 The ritual is practiced by the people of Tana Toraja. While most of the people here have been lifelong Christians, they still follow old traditions that have been passed down from generation to generation. But mixing of beliefs is actually very common in Indonesia where several religions are followed including Christianity, Muslim, Hinduism, Buddhism, and other traditional religions. In parts of Indonesia, the remains of the dead are mummified and kept in colorful and ornate coffins. The bodies of the deceased are often kept in the family’s homes for months before receiving a funeral. 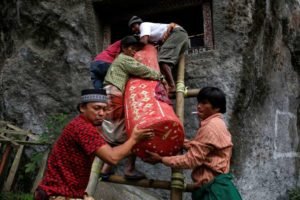 “Even though she’s not here physically, we still have a connection.” said one local, “It’s a chance for the whole family to visit and express our love.” She also said that her family looks forward to the yearly ritual as it acts as a family reunion where all the members of the clan gather together. The remains of her family’s loved ones were kept at Loko’mata, a large boulder in a rice terraced valley. The houses there contain the dead for several families and clans. During the yearly ritual, most family members talk to the departed and offer them food and drink.