New York Police Round Up Wandering Cow in Brooklyn

Last week, a rogue cow was spotted loose in a Brooklyn Park. The New York police department had to be sent in to wrangle the bovine after it became a spectacle for tourists and locals. The cow was spotted roaming the streets then eventually enjoying the park and its facilities. People had gathered in the park to take pictures of the lost cow. 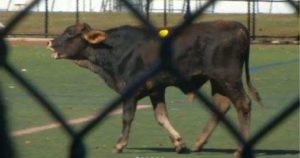 The cow decided to settle in around the 526-acre Prospect Park, the largest in the borough of Brooklyn. The park has artificial turf field used in sporting events. Officers that arrived in the park used soccer goals to fence the animal in a baseball diamond. But the cow barreled through the nets and knocked a police officer down. Eventually the police trapped the cow between two vehicles parked on either side of the field’s bench area. It was then shot with a tranquilizer dart. 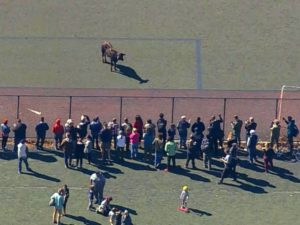 The officers were then willing to wait for the drug to take effect as the cows slowly walked between cars. Eventually they were able to rope in the cow and load it into an NYPD horse trailer. It still wasn’t clear where the cow came from or how it got to roam around freely in Brooklyn. Police said that they would turn the cow over to the animal control department. Although it wasn’t as exciting as a car chase with a criminal, the lost cow drama draw a lot of attention from social media. There are already a few puns and memes created about the story of the lost cow in New York.