The Easter Islands, found around 2000 miles west of Chile, are most known for the large stone statues that scatter the beaches on the island Rapa Nui. These statues reach up to 30 feet high and weigh as much as 81 tons. The statues were said to be built by an ancient Polynesian people that lived on the small island. But by the time the first Europeans arrived in the 1700’s, the population has all but disappeared. 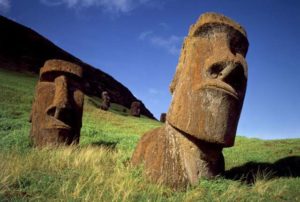 For years, experts theorized on what caused the civilization to suddenly die out. It was commonly believed that the population had descended into in-fighting and the violence resulted in mass killings and a lack of resources. But according to some new discovery, it may not have been the reason for the decimation of the Easter Island people.

The Journal of Pacific Archeology published a paper that contradicts the popular theory. According to recent research, the island’s population may have instead been collaborating on tool making. Dale Simpson Jr., an archaeologist from the University of Queensland, theorized that the raw materials used in carving tools would show clues about the dynamics of their civilization. 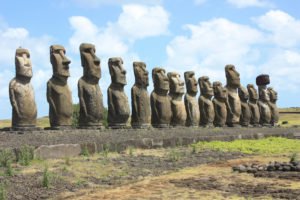 Simpson was able to collect 17 tools found near the statues, including an ax-like device. Simpson believes that the tools are evidence that the people of Rapa Nui did not have violent conflict, but they were instead sharing tools and resources. If the tools were indeed shared by all the inhabitants of the island, it is unlikely that they would have warred with one another. If this theory holds true, it does throw out the widely believed theory on the downfall of the Rapa Nui civilization, but it does not answer the question of what happened to these people that they were so quickly annihilated from the islands.