Mysterious Giant Sea Creature Found Off the Coast of Indonesia

At the island of Seram, Indonesia, the carcass of a strange creature was discovered earlier this week. The bizarre corpse that had beached had perplexed most bystanders. The creature was huge and had a strange shape. It had also started to bleed and turned the blood around the coast bright red. It had tentacles and tusks and brown misshapen skin. These characteristics led to most observers assuming it was a long lost sea monster. A local fisherman first spotted the corpse and thought it was a beached boat. 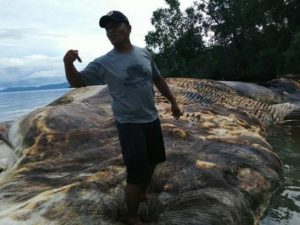 But upon closer inspection, scientists have found out that the animal was probably a baleen whale. The pictures and video of the carcass was sent to George Leonard, the chief scientist at the Ocean Conservancy. It was him that determined that the corpse was very likely a baleen whale. The island of Seram is also close to the migration routes for baleen whales, so the whale could have been swept ashore where it died from having been beached. 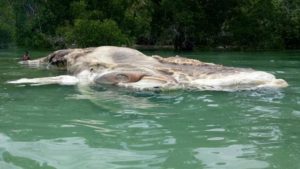 “Trying to identify huge ocean creatures half a world away from a grainy video is tough to do; but once people start sharing specific information that begins to narrow in on defining characteristics of the creature, the identity begins to come into focus.” said Leonard. Baleen whales vary in shape and size as there are 15 different species of these whales. They are among the biggest cetaceans in the ocean with only the blue whale and the humpback whale being bigger.Â  These whales are critically endangered with only a few thousand left in the wild.