When passengers in Germany pass through the Munich Airport, they will now be greeted by a humanoid robot named Josie Pepper. Not only will the robot be independent and interactive, it will also be able to answer passenger’s questions about flight operations of the airport, and will be able to direct them to the nearest eatery or restroom. 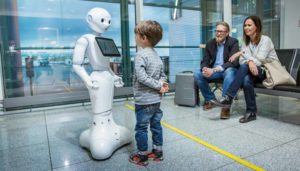 The Munich Airport’s Terminal 2 is where Josie Pepper can be found. The robot will be at the top of the ramp that leads to the shuttle that connects to the main terminal and the satellite building. She will be available for all passengers that want help or information about their travel or the airport’s facilities. Ms. Pepper is only around 120 cm tall, and the robot is designed with round and sparkling green eyes that sparkle when she talks. She also has arms and fingers so that she can replicate human hand gestures. 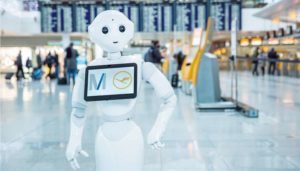 The humanoid robot was developed by SoftBank Robotics. Josie is powered by cloud-based artificial intelligence technologies from IBM Watson Internet of Things. The robot is also more sophisticated than your usual terminal interactive map. Instead of answering with stock statements, the robot is designed to answer questions individually. This is made possible because of her AI, which is equipped with a high-performance processor with WLAN internet access linked into the Munich’s airport data.

The installation of Josie Pepper follows a program that was rolled out at Incheon International Airport in Seoul last year. The South Korean airlines deployed a fleet of robots that would be able to help passengers find their gate or to the nearest airport facility.