Earlier this week, a mother of two in North Jersey had won the lottery prize of $5 million on a last second purchase of a lottery ticket. But not only is she the luckiest woman because of the single spur-of-the-moment buy, she was also actually given the wrong ticket by mistake by the clerk at the store. But thanks to these odd series of events she is now financially set for life. 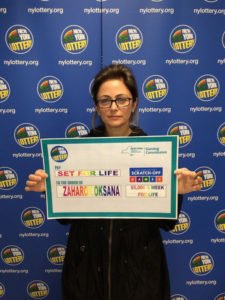 46-year old Oksana Zaharov was shopping in Manhattan when she decided to buy a $1 scratch-off ticket with her spare change. But the clerk who was manning the store accidentally gave her a $10 “Set For Life” ticket by mistake. The ticket was for a lottery that would give the winner $5 million that is spread out over several years.

“When the clerk handed me the wrong ticket, I felt bad so I decided to just go ahead and buy it,” Zaharov said. “I actually used the ticket as a bookmark for a couple of weeks before I decided to scratch it.” When Zarahov scratched the ticket, she could not believe her eyes when she saw that she had actually won the grand prize. She was so shocked because she says she has never won anything in her life. She even thought it was a fake.

Zaharov will get a guaranteed amount of $5 million over the course of 20 years. After that, she will also receive $172,068 annually for the rest of her life. Zaharov says she plans to splurge with her winnings by taking a big family vacation to the Bahamas with her children. But she also plans to set aside some money for her children’s education and tuition.