It was an emotional moment for 29-year old Marty O’Connor to get his degree. It was only 5 years ago since he had fallen down the stairs and was paralyzed from the waist down. For a while, all he had to focus on was rehabilitation, his physical therapy, and getting better physically. But he knew that he eventually had to return to school to finish his degree. But thanks to help from his mother, he was able to accomplish that. And Marty isn’t the only one to recognize the efforts of Judy O’Connor. Along with presenting Marty with his diploma, the University of Colorado also gave Judy an honorary degree. 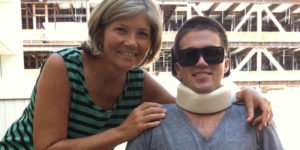 Judy O’Connor was working as teacher in Florida when her son suffered the accident that left his legs paralyzed. It was then that she decided to move to California and help her son out. Not only did Judy help with getting Marty to his classes, she also attended classes and took notes for Marty as he worked to complete his Business Administration degree. 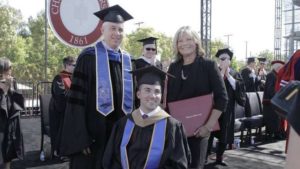 “As soon as we started taking the classes and going through it all, I really found how beneficial it was to have someone who I could communicate with well who understood my needs,” said Marty “We already kind of had that comfort zone that allowed us to work really well together and be successful.” Marty had always wanted to do something to honor all the help that he received from his mother, and he was able to do so at the graduation. Shortly after she helped her son across the stage, the announcer at the graduation ceremony and announced to the crowd that Judy O’Connor would also be getting an honorary degree. Judy passed the stage with tears in her eyes.