A mother in Virginia had a small miracle when she gave birth to triplets. It was called a miracle because she almost lost one or all of her children during the pregnancy. She was told by doctors that she would have to abort one of her triplets for any of them to survive. But she never gave up and even risked her life just so that all three babies could be born. 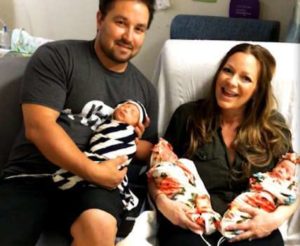 But now, six months later, Cali, Elli, and Rockwell are healthy. Their parents Christy and Ryan Beck from Richmond are getting used to life raising three babies all at the same time.Â  “It’s just been so amazing. Just looking at them every day and their sweet little smiles and, you know, they’re starting to roll over,” Christy said, “They’re definitely coming into their own personalities.Â  It’s fun to watch them together.” 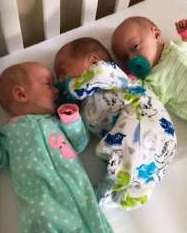 Christy and Ryan started to try to get pregnant about three years ago, but when natural methods would not work, they started to see doctors and specialists about other options, such as IVF and surrogacy. Christy had a complicated pregnancy. She had a bad reaction to some medication, and she had to battle fevers. Doctors eventually advised her to terminate one of the babies, but the couple refused to give up, and decided to take a chance in bringing all three children to term.

“It was just so hard going through the process you know from the beginning, thinking every single little sign was a pregnancy sign when it wasn’t,” explained Christy. “It was worth it to me to take that gamble because that’s how badly I wanted children. I just wanted to do everything in my power to make it happen.”