Earlier this week, a mother in Florida let her blue car accidentally reverse into the swimming pool with her husband and daughter still inside it. Thankfully both the father and their daughter were able to get out of the car and out of the pool in time. The mother has been getting a lot of attention online, with a lot of jokes and puns about “carpools”. 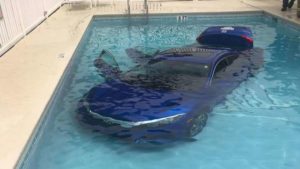 It all started when this family in Florida was getting ready to head out for a shopping trip in Okaloosa County, Florida. Then the mother suddenly realized that she had forgotten the money that they were going to use for shopping. But as she was stepping out of the car, she also forgot to place the car on handbrake.

And so the car slowly slipped backwards into the nearby swimming pool, with her husband and her daughter still in their seats. Luckily, the father was able to escape the car and get their daughter out of the car and out of the pool. The mother went out of their house in shock when she saw her blue SUV sinking to the middle of the pool. 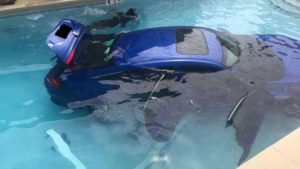 They also called the Okaloosa County Sheriff’s department around 2 pm local time to report the incident. There were no injuries reported, and a deputy officer confirmed that all parties were okay. It was also very lucky that there were no swimmers in the pool at the time of the incident. The only real problem now is how to get the car out of the swimming pool.