In Park City, Utah, a family got quite a shock when they found a full grown moose in their home. Sheri and Matt Prucka were at home last weekend and they inadvertently left their front door open. They didn’t realize that a large moose had wandered right in. Despite their surprise, they still managed to get the large animal on video walking around their house. 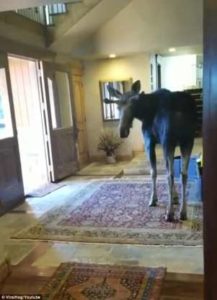 According to the Pruckas, they were alerted that someone or something was inside their home when their dogs started barking. At first their thought that it was a prank by one of members of their family, and that they were seeing someone with a moose head costume. But they realized that it was an actual live moose that had wandered into their home in Hawk Court neighborhood. Sheri then removed the dogs from the room so that the moose would not get upset. 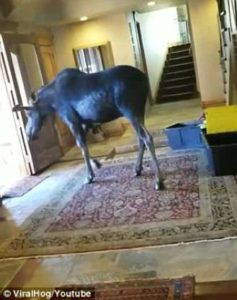 “We began to wonder how we were going to get the moose out because he spun around and accidentally closed the door behind him so then he was in the house with the door closed and we couldn’t get to the door to open it,” Sheri said. Sheri eventually ran outside another exit to open the front door. Matt eventually shooed the large animal outside again.

“He seemed really large and tall and obviously young and perhaps his mom had just kicked him out and he was nice and quiet.” Sheri said, “We were really concerned he might get into a part of the house where we couldn’t get him out. He did get into the kitchen where he stopped and sniffed all the various things out on the counter. It was really kind of cute.”