36-year old Sonia Cheetham has found her own way of cooking the classic English breakfast. The traditional way is to simply heat up a frying pan and throwing everything in until it is cooked. But this mother has come up with a simple but different way of cooking the age-old dish that would make it easier and healthier for her family. And it has taken the internet by storm. 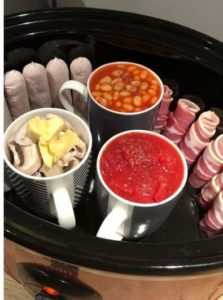 Instead of frying everything, this mother puts all the ingredients in a slow cooker. This includes beans, bacon, sausages, mushrooms, and soup. She says she can even cook scrambled eggs in a mug and cook it that way. Cheetham, who hails from Fransham in Norfolk, first had the idea last month, and when it worked, she posted the hack on Social Media. It has since gone viral. The post was made in a Facebook group called Slow Cooker Wonders. The post has since been shared more than 27,000 times. 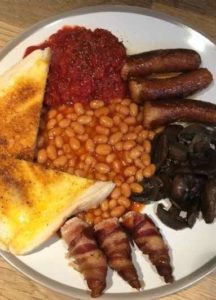 “Using a slow cooker is so easy, I’m type one diabetic so I don’t like cooking with all that fat, and it gets everywhere as well so this saves your arms.” said Cheetham, “The slow cooker is a much healthier way of doing things, don’t add any oil or water to the pan, just a bit of butter to the mushrooms. I find that the meat, in particular the sausages, taste much better, they’re far softer and have a lot more flavor.”

“It’s been a hit with the children anyway! Now it’s getting colder outside, it’s nice to send them to school fed with warm food. It only takes about eight or nine hours, so when you wake up in the morning all you have to do is stick the toast on, and then dish up.” she added.