Mom’s Before and After Pics Go Viral

In recent days, people have passed around this viral photo of a mother’s before and after picture. The before photo, taken by her daughter, was taken before her mom went out for a Saturday night out. The second picture, also taken by her daughter, was taken the morning after. The second picture shows how much change can happen after just one night out.

18-year old Brooke used her twitter account to share picture of her mother Donna, who dressed up, put on makeup, and had her hair done for a night out in town. Donna was headed to a Lady Gaga tribute night. But right next to the first picture is another photo of Donna and what she looked like the morning after. This time, with Donna just wearing just a robe, with messy hair, no makeup and a tired and hung-over look on her face. 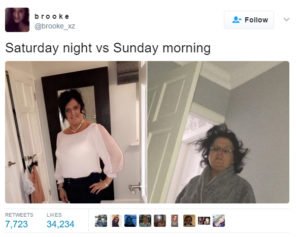 Brooke was expecting to share this funny ‘before and after’ picture with her friends and family on twitter. Donna even told her daughter that she had hoped to get a hundred likes for posing for the funny twitter pic. Little did the mother and daughter know that the picture would go viral. The before and after pictures, entitled ‘Saturday Night vs Sunday Morning’, has had more than 7,000 retweets and over 34,000 likes. Most comments are made to assure Donna that most people have gone through what she has, although most of her sympathizers are half her age.