A mother in New York decided to take her kids with her for a haircut. But for this family, a haircut meant having to cut off more than 17 inches of hair. Phoebe Kannisto and her 6 sons decided to cut off their locks for charity. Kannisto has a 10 year old named Andre, two 8-year old twins Emerson and Silas, and 5-year old triplets Reed, Dexter, and Herbie. All of them had been growing their hair out for the day they could cut it off for charity. So it was no wonder that the total amount of hair they collected as so much. 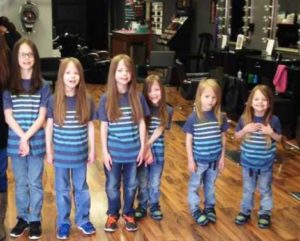 Aside from the 6 boys and their mom, their Dad Eric Kannisto and their youngest sibling, a 2-year old daughter named Marah Taylor, watched and cheered them on. It took just a few hours to shear off all the excess hair from mommy and the boys. The hair was to be donated to Children with Hair Loss, a non-profit organization that provides children and adults that have rendered them without hair. Wigs with real human hair can be expensive so donations are very welcome. 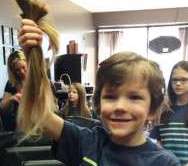 “After the haircuts, they were all beaming with pride,” said Phoebe. “It’s been four days and they’re still smiling. Their little sister desperately wanted to donate with them, but instead they promised her they’d all do it again. Next time, they plan on all seven of them to donating together.” Phoebe says she’ll miss seeing all her sons with their long hair. But what she won’t miss is having to explain to strangers that she actually has 6 sons and not 6 daughters.