Missing Turtle Turns Up in Golf Course 22 Miles Away

Last week, Bubba the tortoise escaped from her cage at a school at the Pacific Palisades. She was missing for a few days before she was discovered in a golf club some 22 miles away. According to a report, the tortoise seemed to have walked the entire time he escaped until he was spotted near the greens of the golf club. 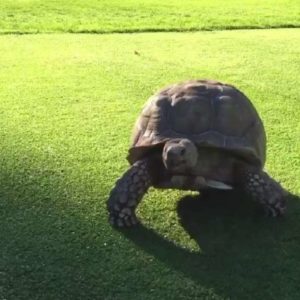 Los Angeles media reported that a 140-pound tortoise named Bubba had escaped her habitat at the Paul Revere Middle School in the Pacific Palisades. The tortoise was well loved by all the kids, and everyone was worried for the reptile. But just a few days later, the tortoise was found at the DeBell Gold Club in Burbank, which is around 22 miles away from the school.

“When you think you have seen it all at DeBell GCâ€¦ Today, there will be slow play on Hole 18 due to the ‘Snapping Turtle.’ Book your next tee time at DeBell, it’s just like visiting the zoo,” the golf course wrote on their Facebook page. They also posted pictures of the lost and found tortoise. 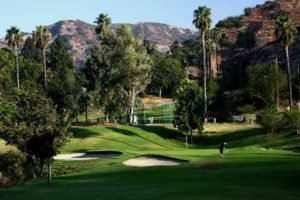 One of the members of the club remembered seeing something about a missing turtle and contacted the school. Bubba was immediately recognized and was returned to his habitat. Giant tortoises move very slowly on land. The fastest tortoise speed recorded is only 5 miles per hour, and the average tortoise travels at only .17 miles per hour. This means that Bubba could have been walking for three straight days to get to the golf course.