In Kuala Lumpur, nine members of the Royal Malaysian Navy were found after almost an entire day of being reported missing. The sailors were sent in to stop illegal fishing that had occurred near Johor. It was said that the boat that the sailors were using had stalled, which had sent the crew adrift. Thankfully, the entire crew did not drift off their course, and they were found and rescued after a day. 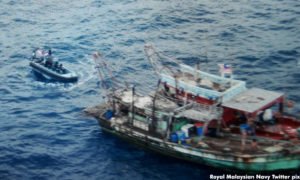 According to the chief admiral of RMN, Tan Sri Ahmad Kamarulzaman Ahmad Badaru , they would be opening an investigation on the cause of the entire incident. They will also look into why they crew had lost radio contact. The boat, which had come from KD Perdana, was seen 160 kilometers off the coast of Kuatan. The ship was spotted by a Royal Malaysian Air Force Beechcraft. According to the pilot of the Beechcraft, the ship and the crew looked to be in good condition from the air.

When communication was cut with the sailors, the KD Perdana immediately sent out a search party to look for the boat and its crew. When they could not locate the men after the initial search party, a search and rescue operation was launched. The search and rescue operation or SAR operation was established at the Navy Base in Kuantan. The crew was fortunate to have such good weather conditions when their engine had stalled. During the time that the boat had gone missing, the waves were not that strong. The winds were reported to be between 20-30 kilometers per hour.