A giant yellow inflatable duck named Daphne made the news this week after it was discovered moored in a beach in Australia. The giant inflatable bird was found after a week on the lam. A swimming club that had owned the duck posted about the missing duck in their social media page. The duck had drifted off into the Indian Ocean and had been missing for several days. 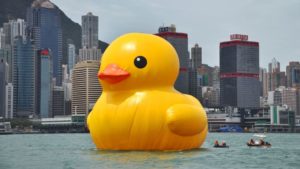 The giant duck named Daphne is the mascot of the Cockburn Masters Swimming Club in Perth. The inflatable animal drifted out into the ocean on March 11, and the club made an appeal to the public for any information about the whereabouts of the duck. Reports of the duck started to come in soon afterwards, with some reports spotting it more than 250 miles away.

But earlier this week, a local fisherman gave a report that he spotted the large inflatable toy just 30 kilometers off shore. The fisherman towed Daphne back to shallow waters and reported the sighting. 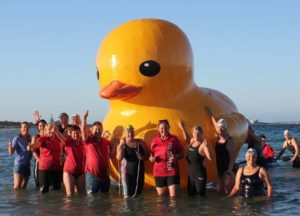 “No-one knew about a missing duck at that point, we didn’t know where it came from,” said fisherman Tony Gibb, “It looked perfect. It was fully inflated, there was no damage to it whatsoever.”

Giant inflatable rubber ducks drew attention in 2007 when Dutch artist Florentijn Hofman created one as an artwork. The work of art was 18 meters tall and travelled all over the world in many different cities. Since then, there have been many replicas created, including this giant duck mascot for this Australian Swimming club.