Miniature Donkey Could be World’s Smallest

A miniature donkey called Ottie may well be the world’s smallest donkey at just 19 inches tall. Ottie is a good six inches shorter than the current Guinness World Record holder, KneeHi. KneeHi (pronounced knee high) is a 10-year old miniature donkey with a height of 25.29 inches. Ottie still needs to be examined and verified next year by representatives of Guinness World Records before he is awarded the title. There is a delay because Ottie is still young and he can still grow a few more inches before reaching maturity. 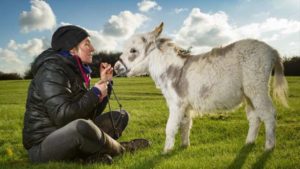 “Donkeys do 90 percent of their growing in the first year so I knew he wasn’t going to grow any more, this makes him around nine inches smaller than the Guinness World Record holder,” said is owner, Cheryl Griffiths. Griffiths says that is a joy to take care of Ottie. She says its jus like taking care of dog. Only Ottie will need bigger spaces to run around in than your typical house pet.

“Ottie’s amazing,” Griffiths, said. “He makes a great pet. My mom has already said she wants to take him off me and he’s small enough to walk around her house. With miniatures you can do all the same things but without riding them. It’s brilliant, they can do shows and competitions like dressage and agility â€” like an obstacle course where you run alongside them.”

Ottie is friends with the 12 other miniature horses that Griffiths owns. She said that she began to take care and adopt miniatures after a back injury prevented her from riding normal sized horses. Officials can decide whether Ottie will break the record by March of next year, when he reaches full maturity.