When Nicole Hawke and her kids were chosen for the ceremonial coin toss at a football game for the University of Nebraska, they expected it to be the most exciting moment of the game. Little did they know that one of the football players for the University of Nebraska was actually someone that they knew very well. Hidden in a Cornhusker uniform was none other than Nicole’s wife Sgt. Matthew Hawke, who was there to surprise them. 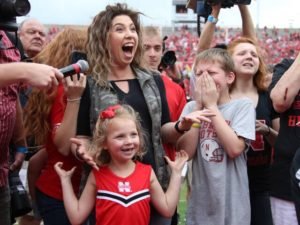 For Hawke, it was not only a chance to surprise his wife and 6 kids, it was also a chance of fulfilling a life-long dream of putting on the uniform of the University of Nebraska football team. During the traditional coin toss, captains of each team are expected to meet at the middle of the field. When Hawke took off his helmet, he was met by surprised gasps and tears from his family. 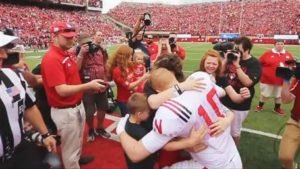 The 39-year old Hawke was deployed for Afghanistan for a 10-month tour. Prior to the end of the assigned tour, he told his wife that he had to stay behind for another 30 days to train the incoming unit. Hawke actually volunteered, but the Army did not need him for the task, so he decided to come home early and surprise his family instead. Hawke reflected that it was a dream come true to support his team and surprise his family all in one event. The only regret he had was misleading his wife, who was surprised until the very last moment when he took off his helmet at midfield.