The Parliament house at Kuala Lumpur, Malaysia, receives several special visitors each year, including international diplomats and representatives from other countries. This is part of its purpose as the seat of power for MalayÂ politics. But earlier this week, the parliament received a different kind of visitor. Their special guests weren’t even the same different species. The parliament, it seems, was overrun by a herd of deer. 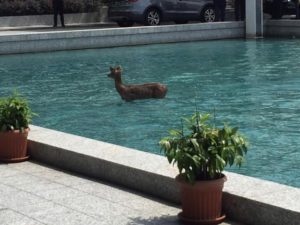 Datuk Rosnah Abdul Rashid Shirlin, the Deputy Works Minister, had just finished a of question and answer session at the Dewan Negara, and she was about to leave the premises, when she noticed something odd. There were three deer in the ornamental pool that was located in the main tower of the compound. Aside from the pair that was found near the pool, there were also other deer found near the entrance. She took a picture of the deer by the pool and later posted it on social media. 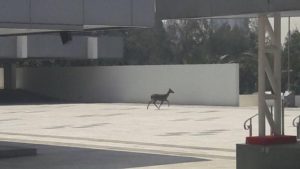 The Parliament officials later found out that the herd of deer escaped from a nearby deer park, which is located right next to the car park of the Parliament compound. But the deer didn’t stay long in the government compound, after Shirlin informed the staff of the building, they managed to herd all the deer that had wandered into the compound and return them to the park from where they escaped. The parliament building of Malaysia is located at the Lake Gardens area in Kuala Lumpur. The compound is located near the Malaysian National Monument.