Earlier this month, French artist Amraham Poincheval was able to hatch chicken eggs. This was done for his latest performance, wherein he decided to hatch chicken eggs using his own body heat. The incubation took a total of three weeks to accomplish, and he was able to successfully hatch 9 eggs into little chicks. Poincheval’s latest project had him imitating a hen and sitting on a nest of eggs until they hatched. 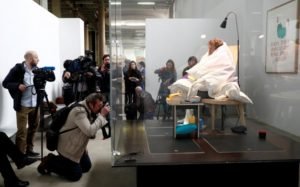 The project was all displayed inside a glass viviarium at Paris’ Palais de Tokyo contemporary art museum. Poincheval sat on a char and wrapped himself with an insulating blanket. This kept all the heat from escaping his body. The vivarium was empty save the container and the artist, and a small message board at the back wall. The artists sat over a container that held 10 eggs. Poincheval could not leave his “nest” for more than 30 minutes at a time, which he spent to go to the toilet or to eat his meals. 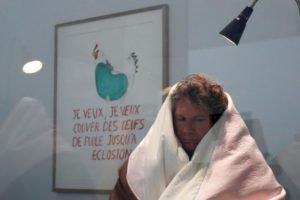 Before he began he had estimated that the eggs would hatch 20-25 days after he started incubation, and his prediction actually came true, with the fist chick hatching three weeks into the incubation. All but one egg had hatched, and the chicks were then sent to a farm. This is not the first extreme performance art done by Poincheval. He once spent a week inside a block of stone, and before that, he lived inside a hollowed out bear sculpture for two weeks. The type of performance art is similar to endurance art, wherein artists try to reach the physical limits of a certain activity.