Mexico Breaks the World Record for Largest Serving of Guacamole 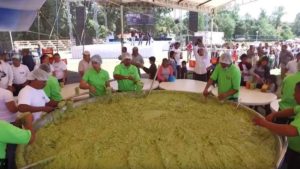 During the festival, more than 350 people from the local community joined in to smash, slice up, and mix the ingredients for the guacamole. The ingredients that were used for the large serving included a lot of avocados, tomatoes, onions, limes, and cilantro. They were all mixed together to create the record breaking serving. All in all, the entire vat of guacamole weighed more than 8,300 pounds. And the guacamole was not created just for the record, after the event was over, the guacamole was given out for the people of the town to enjoy. 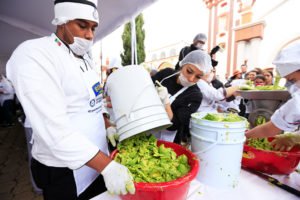 Guacamole is known for its signature green hue. It has been used as a dip or a salad dressing in Mexico for thousands of years. It can be traced back all the way to the ancient Aztecs. The name Guacamole actually means avocado sauce in the ancient native language. It was a combination of the word “Waka”, which meant avocado, and the word “Mole”, which meant sauce. Today the sauce is enjoyed all over the world. It is known as a signature Mexican food dish that is best served with chips or as a topping for other Mexican classics such as tacos and nachos.