Message in a Bottle Connects Strangers in Florida

A message in a bottle, which was thrown to sea more than thirty years ago, has brought together two strangers together in Florida. A man by the name of Ryan Burchett first found the brown glass bottle while he was fishing on Little St. Simmons in Florida with his family and friends. Burchett was walking along the shore picking up seashells when he saw the bottle. 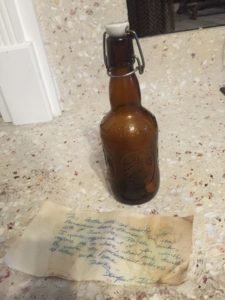 According to Burchett, he knew the bottle was different because of how it looked. He held it up against the sun and could see a note inside the bottle. Burchett then tried to open the bottle, but the cork fell apart and fell in. He then used a stick to pull out the note. It said:

“This bottle was set adrift off Fernandina Beach, Florida on the 10th of June, 1981. To the finder, I would appreciate it if you would respond as to where, when and found by whom. My permanent address is as follows on the back. Thanks, Douglas H. Stephens.” 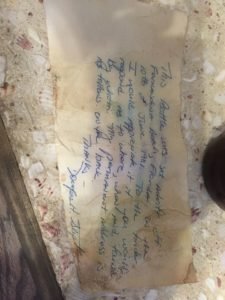 Burchett then tried to find Stephens but the address in Georgia was sold several times over the years. He was also unable to find Stephens on social media because he did not have an account. But the company Southeast Adventure Outfitters volunteered to post the message on their Social media page for Burchett. The post received more than 1,500 shares and comments, but Stephens was still not found. Eventually, someone was able to find Stephens and gave him Burchett’s number. The two men talked for quite some time and shared stories about the island and about life. The two are planning to meet in person later this year.